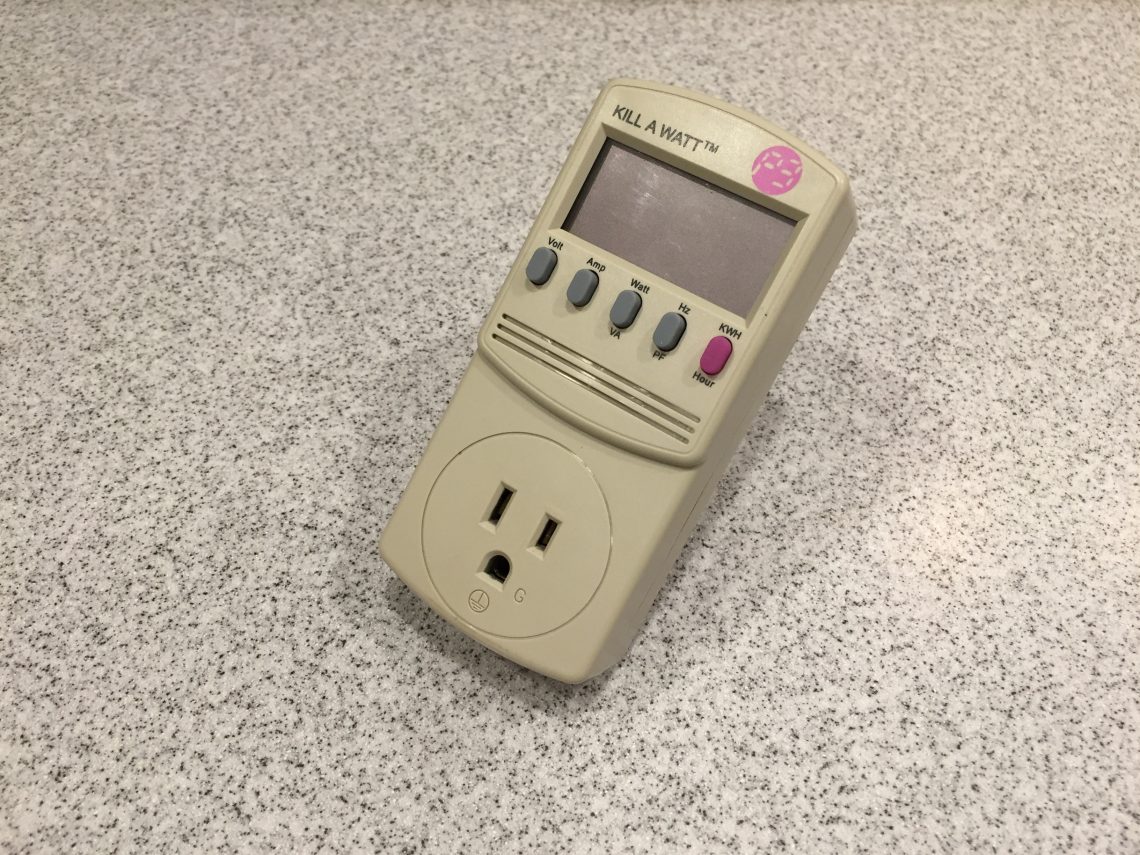 Phantom loads, parasitic power, vampire power, so many names for the same thing; your electrical devices slowly making you poorer!  These terms all refer to the power drawn by electrical devices that are plugged in but not being used, yet still drawing power.  Think of power supplies plugged into the wall, computers, TVs, kitchen appliances, fire alarms, and garage door openers.  All of these draw some power, even when not being used.  Some items can draw considerable standby power that really adds up.  This article will detail our process for tracking down and taming electrical gremlins.

Our interest in this topic all started after attending a fair in our town where our electricity provider, AEP, had set up a booth to promote energy efficiency.  For a limited time they would send you a free Power Bridge (link for AEP customers), so you could monitor your homes power usage in real time via a mobile app.  Very cool!  I download the app and waited for the Energy Bridge to arrive.  After plugging it in and going through a simple setup, we could see our power consumption in real time.  The Power Bridge uses your Wifi or Ethernet connection to link up with your smart meter.   By being able to see power consumption, we could gauge how much power was being used when we were not using anything in the house, or our phantom load. 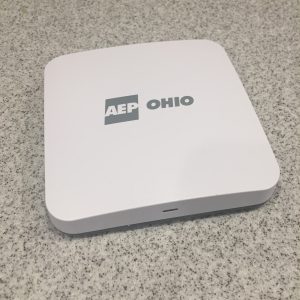 The energy bridge gave us an idea of our total power usage, but to track each load individually, we would need a different tool.  A Company named P3 sells a product named Kill A Watt that performs the same functions as our energy bridge but for individual appliances.  During our hunt for power robbing devices, we used both the Kill A Watt and the power bridge.  If you do not live in an area with smart meters and the ability to get a power bridge from your electric company, you can use this same process with just a Kill A Watt meter.  The device is fairly simple to use, just plug in the appliance to the meter and plug the meter into your outlet.  Here we were checking the can opener, which does not draw any power when it is not being used. 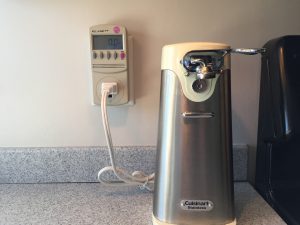 We started off monitoring our current electrical usage.  There are quite a few items in our house that use electricity in the middle of the night or when we were out of the house.  This includes our aquarium, outdoor lighting, HVAC, and anything that may be plugged in but set to “off”.  Our lowest power consumption was around 225 watts.  When we are home cooking, doing laundry, or watching TV, our consumption is much higher.  Our highest energy usage in the past month was over  6,000 watts or 6kW. 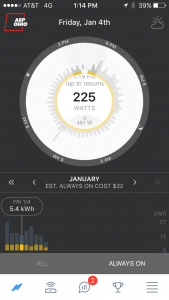 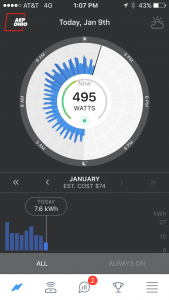 Now that we had our baseline phantom load of 225 watts, we could start to hunt for ways to reduce that level.  Below is a table of the devices we tested while “off”/standby vs being used.

It is very interesting that some devices do not actually consume any power, or consume negligible power, when plugged in, but are not in use.  You can stop having nightmares about your iPhone charger driving up your electric bills when they are not charging a phone because they consume less than .1w.  The Kill A Watt showed 0 watts being used by an iPhone Charger in standby.  But even at 0.1w, it would take over a decade to cost a mere $1 in electricity.

How to Calculate Annual Electrical Costs

How to Improve Energy Efficiency of Phantom Loads

Some items we had definitely needed improvement. The computers and aquarium were both areas where we could optimize.  So, what can you do to improve?  Well the first thing would be to unplug any unused or seldom used devices.  Next, you can look at reducing the power consumption by using a smart outlet or smart power strip.  There are several variations to these power strips.

Use a Smart Strip

A smart strip is able to use the power consumption of one device to control power to other devices. When one device, such as a screen, is on, the other items will be on as well. This works great for a TV with a bunch of other attached electronics. When you turn the TV on, all the other items used with the TV can now be turned on as well. When it is not in use, your Blu-ray player, speakers, gaming systems and other devices behave as if they are unplugged.

Use A Smart Outlet

Another variant of the smart power strip is the smart outlet.  They sell so many styles of these today it is hard to keep track.  You can have them controlled by nearly anything you can imagine, from your phone to your smart home controller.  We have come a long way from “clap on –  clap off”! 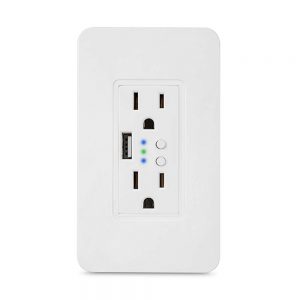 You can also look at using more efficient versions of a product.  For example, we recently went from a fluorescent fixture to an LED fixture for our fish tank.  The old fluorescent fixture was drawing around 46w and 2.3w when off, while the new LED fixture draws 0.9w when off, and only 15W when on!  That’s a 60%+ reduction. I also insulated the bottom of the tank to help minimize the amount of time the electric heater is on.

What about items that are now always on, but are used in varying amounts, like your clothes dryer, hair dryer, or aquarium heater?  The Mrs. wrote a good post on the clothes dryer that you should definitely check out.  I took a deeper dive into the aquarium electrical consumption and hair dryer.   For the aquarium, I attached the Kill A Watt to the power strip and let it run for a few days.  This would track everything in use on the aquarium.  The Kill A Watt is capable of looking at the cumulative electrical consumption as well as the instantaneous usage.  The cumulative consumption of the aquarium was 6,460w over 4 days, which costs me $0.18 per day.  These measurements were all taken after the upgrade to the LED light.  Unfortunately, there is not much I can do about the electric water heater, other than better insulate the back and bottom of the aquarium.  I also have to note that this is the winter time and the house is significantly colder than the aquarium.  In the summer time the house is right at the desired aquarium temperature, so I would not expect the electric heater to be running half the year.  I plan on revisiting this in the summer and will post a comparison of the power consumption in summer as well. 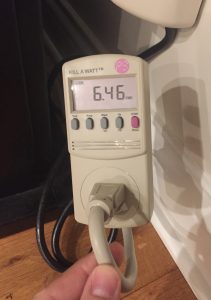 Sam was nice enough to allow the Kill A Watt to be hooked up to her hair dryer for a week.  During that time, her daily usage averaged 0.11kWh, which is roughly equivalent to $0.01 per blow dry.  Not too bad!  Over a year, it only runs us $3.65 for daily use of the blow dryer.

Now for the really awesome part, some libraries allow you to borrow a Kill A Watt meter free of charge. This is not a widely known fact.  Even the first librarian I spoke with had never heard of this item being offered.  But some quick searching on the library website revealed, not just the power meter, but a whole host of other items available to borrow at the library.  Everything from jumper cables, to wireless hot-spots. Check out a meter and start poking around, you never know what you might find. 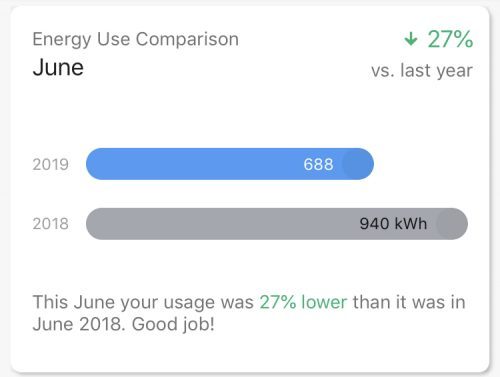 Make the Switch to LED Bulbs